OFCCP Settlements Zero In on Equal Pay and Hiring 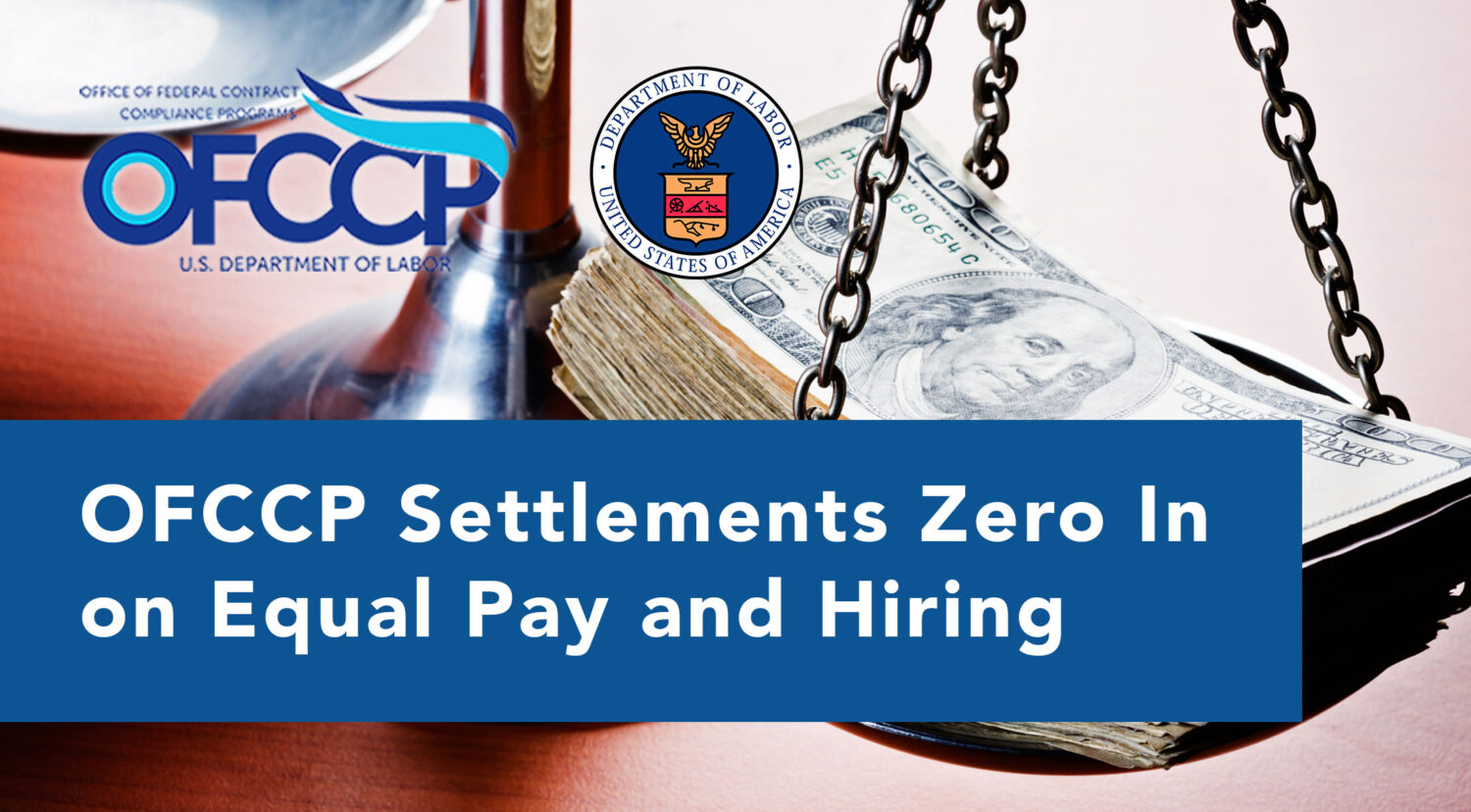 A spate of recent conciliation agreements released by the Office of Federal Contract Compliance Programs (OFCCP) shows that the agency is making good on its promise to enforce equal pay and hiring rules. Equal pay has been a stated focus of the agency even before the Biden administration, which has promised to keep equal pay at the forefront of the Department of Labor’s enforcement efforts.

In addition to complying with Title VII of the Civil Rights of 1964 and Executive Order 11246—which prohibit employers from discriminating in hiring or employment decisions based on race, color, religion, sex, sexual orientation, gender identity, or national origin—federal contractors must also develop affirmative action plans and comply with OFCCP auditing and recordkeeping requirements.

As a result of their collective recordkeeping and auditing failures, the federal contractors in the most recent set of published conciliation agreements will pay a grand total of $3,512,636 in back pay and interest to remedy their missteps; missteps which could have likely been avoided if the offending federal contractors had implemented adequate internal audit and reporting systems to measure the effectiveness of their affirmative action programs.

Aecom Management Services, Inc. was ordered to pay $205,000 in back pay and interest to resolve OFCCP claims of statistically significant hiring disparities for the position of Aircraft Worker at its Virginia Beach location, resulting in a hiring shortfall of 8 Black hires.

HM Health Solutions, Inc. agreed to pay $410,000 in interest and back pay to settle allegations that the company paid White, Black, and Bi-Racial employed less than Asian employees.

IBM US Public Service GBS agreed to pay $350,000 in back pay and interest to settle claims that it paid 115 female project managers less than 141 similarly situated male employees.

International Packaging Corporation (Interpak) entered into a conciliation agreement with OFCCP to distribute $160,000 in back pay and interest to female employees who were paid less than similarly situated male employees in Machine Operator positions.

Korrect Optical agreed to pay $227,636 in back pay and interest to settle claims that Black and White hires were disparately underrepresented compared to Hispanic employees for Operatives job group positions over a two-year period.

Regus Management Group agreed to pay $900,000 to settle claims that its selection process resulted in an adverse impact against male and Black applicants for the positions of Community Associate and Community Manager.

Serco Inc. agreed to settle with OFCCP for the sum of $150,000 in back pay and interest to absolve itself of claims that it paid female IT employees less than male employees in the same group.

Thompson Reuters Corporation will pay $550,000 to settle claims of disparate compensation based on race and gender for five different positions.

Equal pay and hiring missteps, as exemplified in the cases above, can result in significant monetary fines, not to mention the burden of ongoing compliance monitoring and potential reputational damages. In light of the OFCCP’s heightened focus on equal pay and hiring practices, federal contractors must be proactive in reviewing their policies, procedures, and practices to ensure compliance with OFCCP requirements.

To learn more, don’t miss our complimentary webinars RECORDKEEPING R01 – Maintaining Applicant Flow Data and COMPENSATION P01 – Analyzing for Compensation Data. If you need help with your AAP compliance efforts, HR Unlimited Inc. can help! Our comprehensive affirmative action services assist you in all phases of affirmative action compliance. Contact us today to learn more about the many benefits of our Affirmative Action Partnership!