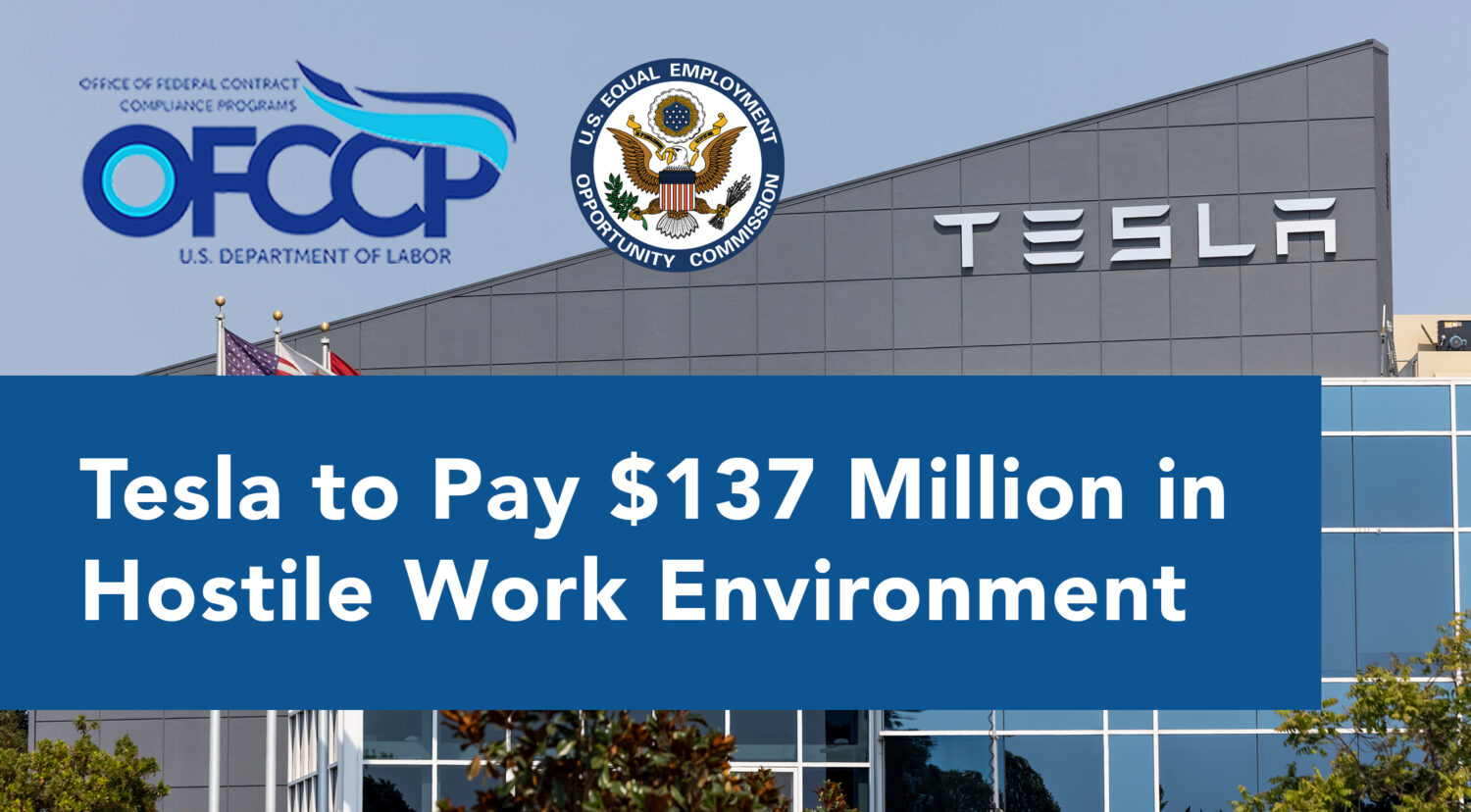 A federal jury in California recently awarded a record-breaking $137 million award against electric car maker, Tesla, on accounts that the company did not adequately address racially discriminatory conduct against a former contract employee who is Black.

According to the suit (Diaz v. Tesla Inc., 17-cv-06748, U.S. District Court, Northern District of California (San Francisco)), Owen Diaz, who worked as a contract elevator operator at the company’s Fremont, California location, was subjected to racially derogatory conduct by supervisors and others at the plant over the course of 2015 and 2016. The offensive and derogatory actions included:

The jury in the case determined that the conduct was sufficiently pervasive and offensive to create a hostile work environment. Diaz says that Tesla was told about the offensive conduct numerous times but did not effectively remedy the situation.

The case is unusual in many respects. For one, the large damages award is unlike any other seen in a case involving a single individual; most large awards involve a class action on behalf of multiple plaintiffs. This was due in large part to the suit being filed under Section 1981, whereas most such claims are brought under Title VII of the Civil Rights Act of 1964.

Section 1981 claims are limited to claims of intentional discrimination, which can impose a higher evidentiary burden, but there is no cap to damages. In contrast, Title VII covers more categories of discrimination and also claims of disparate impact (i.e. a facially neutral policy that has a discriminatory effect), but punitive damages are capped at $300,000. In this case, the award of $130 million in punitive damages and $6.9 million for Diaz’s emotional distress was clearly designed to send a message to the carmaker and big business.

In addition, most such cases never make it to court because of Tesla’s mandatory arbitration rules. Diaz had not signed one and so was not prohibited from taking the case to court.

In an official statement about the case, Tesla indicated that since the offensive conduct occurred, the company has taken several measures to improve its equal employment and diversity and inclusion efforts. This includes:

Federal Contractors Must Provide a Workplace Free of Discrimination

The case underscores the obligation of employers under Title VII of the Civil Rights Act to prohibit workplace discrimination on the basis of race, national origin, religion, or other protected class. These same obligations apply to federal contractors and subcontractors under Executive Order 11246, as enforced by the Office of Federal Contract Compliance Programs (OFCCP).

Under Title VII and EO 11246, employers cannot discriminate against a protected class in any aspects of employment, including hiring and firing, promotions, training, benefits, job assignments, layoffs, or any other term or condition of employment. They are also responsible for creating a work environment that is free from harassment or discrimination.

Preventing harassment starts with informing employees that harassment is prohibited. It’s also important to let employees know who they should contact to discuss harassment questions or concerns and assure them that they will not be punished for asking questions or sharing their concerns.

Employers should respond to discrimination questions, concerns, and complaints promptly and effectively. This includes ensuring that managers understand their responsibility to stop, address, and prevent retaliation. It is also important to thoroughly document all complaints and employer efforts to address and effectively resolve those complaints.

3. Review and Update AAPs and Anti-Discrimination Policies and Procedures

HR Unlimited, Inc specializes in helping federal contractors and employers effectively meet their AAP and EEO compliance obligations. Please contact us to discuss any of your questions, concerns, or needs in this area.