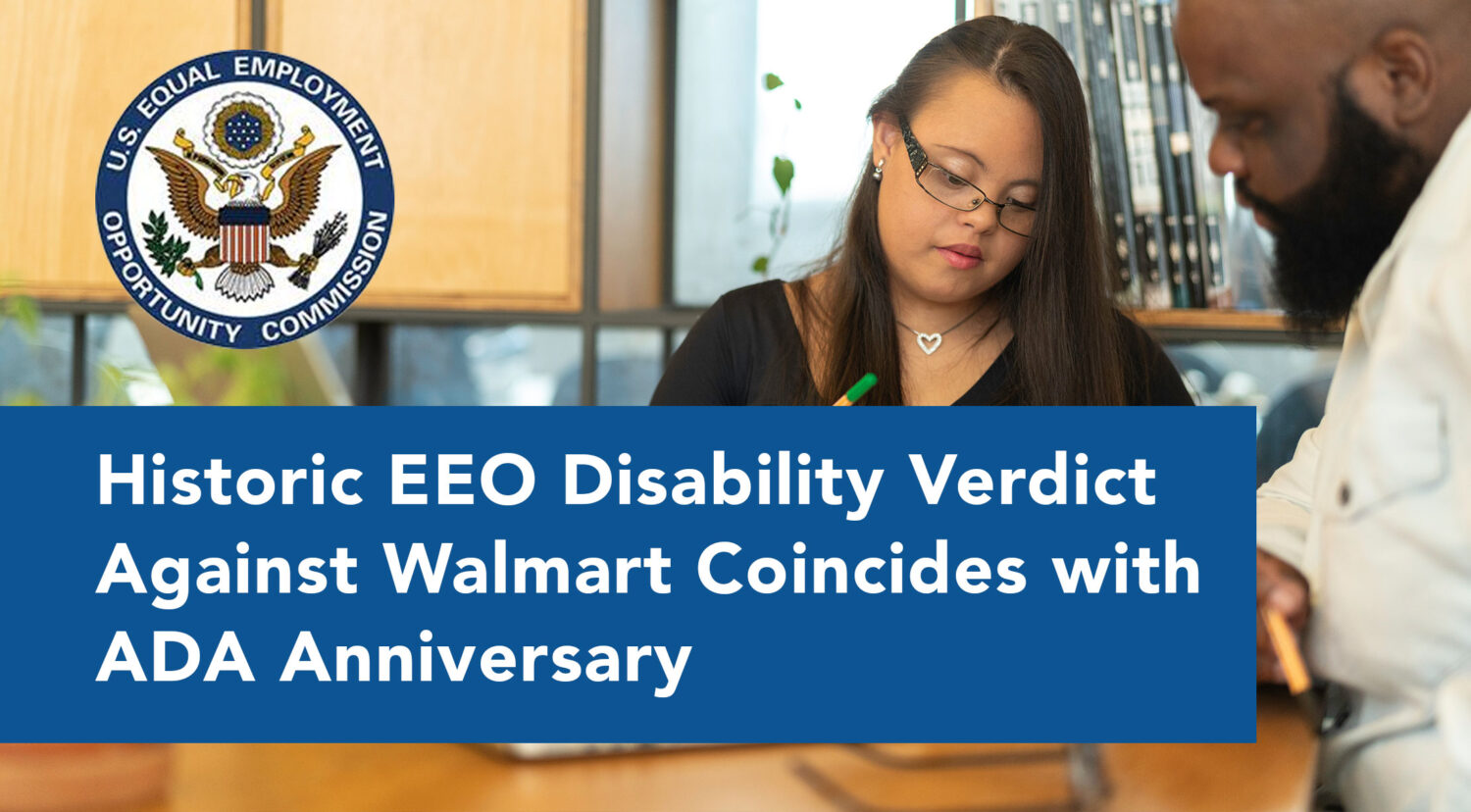 In a recent jury verdict, Walmart was ordered to pay $125,150,000 for claims of disability discrimination brought by the U.S. Equal Employment Opportunity Commission (EEOC) on behalf of a former employee with Down syndrome, Marlo Spaeth. Spaeth was fired from her position of nearly 16 years after Walmart changed her long-standing work schedule and she subsequently exhibited attendance problems.

In the months preceding her July 2015 firing, Walmart had implemented a new computerized scheduling system that adjusted employees’ work schedules to respond to staffing demands at the store’s busiest times. After her noon to 4 pm shift was switched to 1 pm to 5:30 pm, Spaeth struggled to adapt to the disrupted schedule. She frequently left early, citing worries that she would miss her bus and dinner. Her early departures were marked as incomplete shifts by management, which led to disciplinary action against Spaeth for excessive absenteeism and ultimately her firing.

As experts in the case testified, people with Down syndrome often thrive on routine and can be severely impacted by changes to their daily routines. Evidence demonstrated that Spaeth had consistently performed well at her position and had received positive feedback from her supervisors until the schedule change was imposed.

The court said that Walmart had a duty to review whether flexing attendance requirements should be considered as a reasonable accommodation for Spaeth. The court also noted that such an accommodation would not pose an undue burden on the store which had over 300 employees at the time.

Interestingly, Walmart had argued that it should not be subject to punitive damages in the case because its actions were not done with “malice” or “reckless indifference” to Spaeth’s protected disability rights. However, the court held that because Walmart had substantial resources, including an entire department devoted to reasonable accommodations, and conducted regular training for supervisors on ADA requirements, its firing of Speath demonstrated reckless indifference or maliciousness as to permit a punitive award. Consequently, the eight-person jury awarded Spaeth compensatory damages of $150,000 and a hefty $125,000,000 in punitive damages.

As an EEOC attorney remarked on the case “The jury here recognized, and apparently was quite offended, that Ms. Spaeth lost her job because of needless—and unlawful—inflexibility on the part of Walmart.”

Federal law caps punitive damages at $300,000; it is anticipated the award, in this case, will be adjusted by the court to the $300,000 statutory maximum. The jury award was undoubtedly symbolic, intended to send a strong message to big businesses for their responsibility to reasonably accommodate disabled employees.

The case serves as a reminder that a routinely enforced policy that is grounded in a legitimate business necessity does not necessarily absolve employers of the need to comply with Americans with Disabilities Act (ADA) requirements. The ADA not only protects employees and applicants from being treated differently because of their disability; it also protects them from bearing unintentional discriminatory effects of routine and justified company policies and procedures. Employers must consider on a case-by-case basis whether an employee’s failure to comply with policy is due to their disability and whether a reasonable accommodation should be provided.

Employees and applicants with a disability can request a reasonable accommodation, such as shift changes or environmental modifications, to help them perform their job. Employers must provide such accommodation unless they can establish that providing it would result in a significant expense or difficulty.

Importantly, an employee does not have to make a request in writing or use the term “reasonable accommodation” to request one. Any communication that puts the employer on notice that the employee is having difficulty performing their job because of a physical or mental condition that could be perceived as a disability is enough to trigger the need for a reasonable accommodation inquiry and determination.

Incidentally, the verdict in Spaeth’s case coincides closely with the July 26th anniversary of the Americans with Disabilities Act. The Department of Labor’s Office of Federal Contract Compliance Programs (OFCCP) recently commemorated the ADA’s 31-year history with a reminder to federal contractors of their ADA obligations and OFCCP’s role in enforcing them.

OFCCP estimates that approximately 7% of the civilian workforce is disabled. As a result, it has established a 7% national utilization goal for federal contractors to employ people with disabilities. Federal contractors must routinely evaluate the percentage of disabled persons in each job group. If they are not meeting OFCCP’s 7% utilization rate, they must take steps to investigate and remedy possible impediments in their employment practices that may prove a barrier to the employment of disabled people.