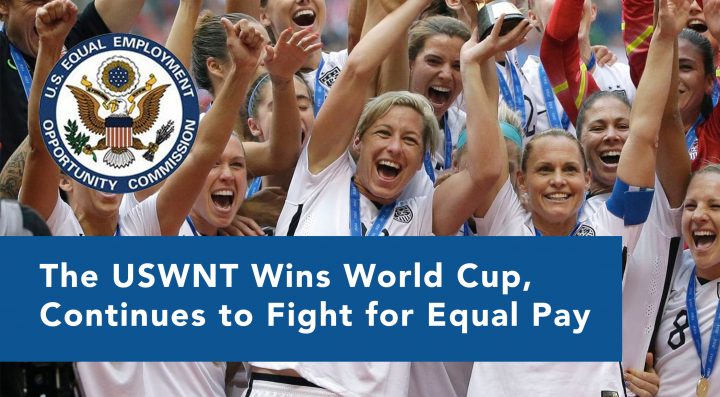 The EEOC just started processing pay data for component 2 of the EEO-1 filing. It is unprecedented and could be a step in the right direction to narrow the pay gap based.

Despite this stellar accomplishment, the USWNT’s fight isn’t over and their struggle for equal pay continues. In March, all of the teams 28 members filed a class action lawsuit alleging gender pay discrimination and seeking equal pay.

Gender pay discrimination has long been an issue in professional sports. Many women’s leagues are still in their infancy and the U.S. Soccer Federation has been slow to pay USWNT players the same rates as players at more well-established men’s teams. The USWNT players are seeking equitable pay and treatment as well as back pay and other damages.

According to the lawsuit, the USWNT claims that despite having the same job responsibilities as players on the men’s national team, they are facing “institutionalized gender discrimination,” in the form unequal pay. The players are seeking an adjustment of the wage rates and benefits they receive.

This isn’t the first attempt by the USWNT to secure equal pay.  In 2016, a group of players filed a wage discrimination complaint with the federal Equal Employment Opportunity Commission. As a result, last month, the players received a right to sue letter from the EEOC.

The team has also worked with the United States Soccer Federation (USSF) to resolve pay disparity issues in contract negotiations. In 2017, they reached a collective bargaining agreement that included raises in base pay and bonuses as well as better provisions for travel and accommodations, including increased per diem. It also gave the players some control of certain licensing and marketing rights.

According to the USSF, collective bargaining agreements are at fault for pay disparities between the men’s and women’s teams. Unlike the men’s team, the women’s team receives a guaranteed salary and benefits like health care. The men’s team’s compensation structure follows a pay-for-play model.

The disparate collective bargaining agreements also include difference in the amount of bonuses granted to the men’s and women’s teams. A recent report by The Guardian discovered a $730,000 gender pay gap in U.S. World Cup bonuses paid to players. The U.S. women’s team earned $90,000 in bonuses for reaching the World Cup quarter-finals. If the USWNT had the same bonus structure as the men’s team, the players’ bonuses would have been six times higher.

Some have argued the USWNT doesn’t have the same market as the men’s team due to the age of the league. The USWNT for example was founded in the 1980s whereas the men’s team dates back to the 1800s. Additionally, the Major League Soccer association averaged an attendance of more than 21,000 fans per game during 2018 season, while the National Women’s Soccer League averaged approximately 6,000 per game.

However, others argue these factors have nothing to do with how the USWNT should be compensated. The recent victory marks the second straight World Cup victory for the USWNT whereas the men’s team has yet to win a World Cup championship. Players on the women’s team are set to earn roughly $250,000 each for winning the 2019 World Cup, much lower than the pay the U.S. men’s national team would receive if they were to win.

The law mandates that employers may not pay unequal wages to men and women who perform jobs that require substantially equal skill, effort and responsibility, and that are performed under similar working conditions within the same establishment. Pay differentials are permitted when they are based on seniority, merit, quantity or quality of production, or a factor other than sex.

How to Address Employee Sexual Harassment This Holiday Season

Key approaches in this endeavor include maximizing thoughtful awareness and deepening understanding of beliefs and tendencies that occur below the surface level of individual awareness. In other words, astute organizations realize that a holistic diversity and inclusion program must include information, explanations, and directions toward addressing unconscious biases and microaggressions.

Often, we don’t realize that implicit biases can sometimes result in microaggressions. In this course, we will demonstrate how subtle or unintentional comments and actions towards others can have a negative impact not just on individuals but on the overall culture of an organization, too.

“Written AAP” is one of the top violations cited by the OFCCP, implying a great need for companies under the OFCCP’s jurisdiction to really get a handle on AAP creation. Part 1 is designed to overview the foundation of written Affirmative Action Plans and their necessity, focusing primarily on the background and structure of an Affirmative Action Plan.

This webinar is designed to provide Supply and Service federal contractors with best practices for performing an organizational profile and job group analysis.

Is FAAP the right AAP for you? Executive Order 11246, Section 503 and VEVRAA allow a contractor to set up their AAPs based on company functional or business units. This option allows the contractor to analyze data by the various operations rather than location/establishment, which may align more closely to their corporate structure. Learn more about the new FAAP Directive and how to comply. You will learn requirements to qualify for FAAP, industries using FAAPs, advantages of using FAAPs, FAAP update, and more.

This webinar will provide an overview of what to expect during an OFCCP construction evaluation. The Office of Federal Contract Compliance Programs (OFCCP) is part of the U.S. Department of Labor. The OFCCP is responsible for ensuring that employers doing business with the federal government comply with the laws and regulations requiring nondiscrimination. When construction contractors face an evaluation, they will first receive a scheduling letter from the OFCCP. This webinar aims to prepare attendees for the events following the scheduling letter.